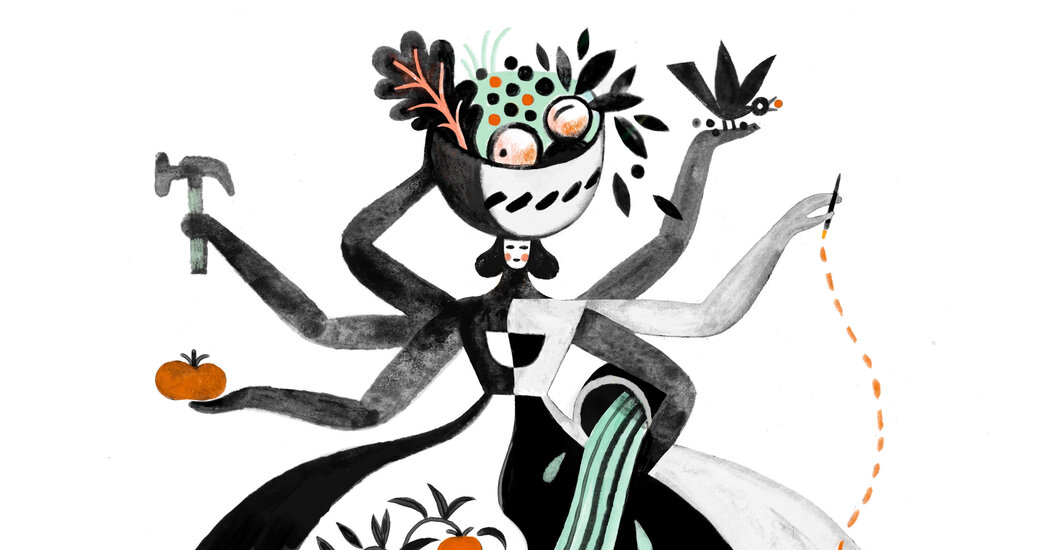 Survivalism can be less about guns and ammo, and more about homemaking and community resilience.

Ms. Ptacin is a writer.

Before the pandemic, I was working on a book about doomsday preppers — people who are actively preparing for the end of the world, or at least major disruptions to our comfortable daily lives. Starting out, my idea of prepping matched the stereotype I’d so often seen: the prepper as a rural, military-minded dude who gathers canned food, guns and ammo, and heads to the hills to wait out the zombie apocalypse.

For the most part, I found the stereotype to be accurate, in spirit if not in detail. A majority of the preppers I encountered were male. They were white, and fearful, though it was masked by a strange facade of pride and bravado. Their prepping was a pre-emptive reaction to what they swore was coming and needed to hide from (in their bunkers) and be ready to fight (with their weapons): civil unrest. There wasn’t a sense of prepping to have enough to share, or to take care of one another. It was more stockpiling ammo along with trail mix. N95 masks next to the powdered milk and pepper spray.

I also spoke to preppers who were professional bunker builders with enormous YouTube followings, who wore MAGA hats through airports, filmed other people’s reactions, then proudly posted them alongside their videos of igniting dynamite next to their bunkers to display their durability. I met preppers who had wine cellars that doubled as safe rooms, pantries with secret doors that stored their automatic rifles. They were positive the end was coming — not from climate change, but from civil unrest, which I sensed to be code for “brown and Black people.” These guys were preparing, all right, but they were also hoarding, and not to save up to share and take care of their communities; they were hoarding so that they wouldn’t have to adapt. I assume they were kind enough to speak to me because, well, I’m a white woman, and they were happy to mansplain. I found little reason to overturn my assumptions about preppers, let alone any way of relating to it.

Then I met Lisa Bedford, a woman known in the prepper community (and on her website) as Survival Mom. She told me that the head-for-the-hills scenario bears little relation to what people actually experience in disasters or other disruptions — and because of that she focuses on another type of prepping: ultimate homemaking and community resilience. “We moms have always and quietly thought in terms of what if,” Ms. Bedford said. “Instead of thinking, ‘What if my kids get too cold outside?,’ we’re thinking, ‘What if this snowstorm keeps us in the house for a couple of weeks and the roads are closed?’” The most basic rule of prepping, she told me, isn’t having a lot of guns and ammunition to fight marauders. It’s the Rule of Redundancy: Have a backup, and then have a backup for your backup.

She talked about the importance of storing water and how to purify whatever is available. She explained the ins and outs of sanitation when one doesn’t have a working toilet and how to make an “emergency john.” How to start a fire. How to make your own sanitizer. How to dehydrate food. How to administer first aid. How to stay cool when it’s hot out. How to outlast a power blackout. How to reuse, reuse and use again. Or, in a word, how to be resilient.

Ms. Bedford grew up in Phoenix and knew nothing at all about homesteading or prepping, couldn’t even can a vegetable. But the fears around Y2K got her thinking about protecting her family. Eight years later, the economy tanked and her husband lost his job. The value of their house dropped by a quarter-million dollars. When she started to research how to protect her family, she discovered the doomsday prepping world and got absorbed in their prepping tips. Now Survival Mom is not just a woman but a brand and a business for her, complete with a how-to book for sale and a loyal following.

Curiously, I found that Ms. Bedford’s take on prepping stirred something in me. As we spoke, I heard echoes of my Polish grandmother’s and my own mother’s upbringing in the little town of Zakopane. They were resourceful because they had to be. Each family member knew how to cook, forage and make a meal out of whatever was available, whether it be from the woods or the small general store, if there was anything on the shelves. They knew how to store food so that it lasted the winter — root vegetables and apples in the dark basement, homemade sauerkraut — high in vitamin C! — in cans piled around the perimeter. The children learned to mend their own clothing and knew how to behead and pluck a chicken. That chicken would feed their family for the entire week. My mother taught me the duty of sharing whatever you had. In my mother’s youth as well as mine, there was always a hot pot of bigos (hunter’s stew) on the stove, ready to share with a neighbor or lost traveler.

For the women in my family, home wasn’t a place to display wealth or superficial decorating skills. Home was shelter, and home was the natural result of what you gave your attention, what you put your energy into, a reflection of one’s value systems. And there was nothing wrong with a woman in an apron.

Since the pandemic lockdown began, I have been forced into the role of home-school mom and chief homemaker, putting my writing career on the back burner while my husband, Andy, continues to be the primary breadwinner; our roles had quickly reverted to 1950s stereotypes. At first, I greeted each morning with indignation and a fight — I’d worked hard to make it to this point in my career. The motherhood penalty had become extreme: My labor was now going to be unpaid, and because of it, the wheels of capitalism would be able to grind on.

After several weeks of homemaking and home-schooling, I felt more like Sisyphus, pushing a boulder up a hill just to watch it roll down again, every day. I was running myself ragged just so that my house looked photo-shoot ready. Was I to tell my kids to stop being kids, to throw away all their craft projects, to hide their Luna moth kit, to stop getting dirty outside so that I’d have less cleaning and laundry to do?

At some point it occurred to me that I might be going about this homemaker thing all wrong. Maybe instead of thinking of my new role as housewife, I should have been thinking of myself as a prepper. And instead of embracing my inner Mad Max, I could channel my own mother and grandmother, and a bit of Survival Mom — to be a nurturing, resourceful and resilient homemaker ready for anything. If Mad Max is the yang of prep — the masculine, overt energy — then I wanted to tap into the yin of prep, the earthy, feminine energy. The yin of prep is about extending your network of neighbors and friends to build resilience in your household, your neighborhood and your community. The seemingly opposite forces contained in the yin-yang symbol are actually complementary. The pandemic shined a bright light on the fact that homemaking decisions and work reflect core values — and for me, they have nothing to do with matching linens or seasonal floral displays.

We live on a small island off the coast of Maine and are connected to the mainland by a ferry service that offers a tenuous lifeline to Portland. An extended power outage or hurricane or, heaven forbid, a continuing pandemic would really test our resilience. And so we are using this time with our children not for standardized test prep but to hone more practical skills — cooking, cleaning, how to start a campfire. We offer homemade chicken soup to sick neighbors. We talk about migrating birds and resourceful chipmunks as natural lessons in resilience. We got walkie-talkies that our older son uses when he goes off to hunt for tadpoles. He may not realize it, but he is learning to navigate on his own and practice radio communications discipline — skills we would like him to have in case of emergency.

I’m learning how to fix things rather than purchase them. I’m keeping a stockpile of food that our family has in case of emergency and can share with other people who know how to fix things. We are learning basic first aid. Andy rescued a couple of broken chain saws and now has them running — we will always have firewood if we need it. We have a garden, which I call our Freedom Garden. Next spring, if the dogs allow, we will have chickens, then perhaps bees.

I view all this as a form of activism and preparedness. It’s activism because I’m avoiding the consumerist treadmill and building my matriarchal clout. As I realized that my ideas of homemaking were evolving, I also realized that prepping, for me, meant feeling more connected to my neighbors, not less connected. I know that in case of emergency, there are a dozen other moms (whose ages range across many decades) I can call who will gladly help out. And I would do the same for them.

I’m doing this because I’m thinking about the future. I will never have an immaculate home. My kids won’t be doing Model U.N. or tennis camp or playing Fortnite anytime soon. When we are a little feral, and a little scrubby, we see where we fit in nature and how to respect it and how to thrive together as a team. Isn’t that the point of homemaking anyway?

Mira Ptacin is the author of the memoir “Poor Your Soul” and “The In-Betweens: The Spiritualists, Mediums and Legends of Camp Etna.”

The Times is committed to publishing a diversity of letters to the editor. We’d like to hear what you think about this or any of our articles. Here are some tips. And here’s our email: letters@nytimes.com.

Listen to Nights with Alice Cooper on Rock 105.3 WRLO on TuneIn

Prepping On A Budget: The 7 Rules You Need To Know